A scheme of the network implemented in dbnBIAL application for two first time slices separated by a period of 6 months is presented in figure below. 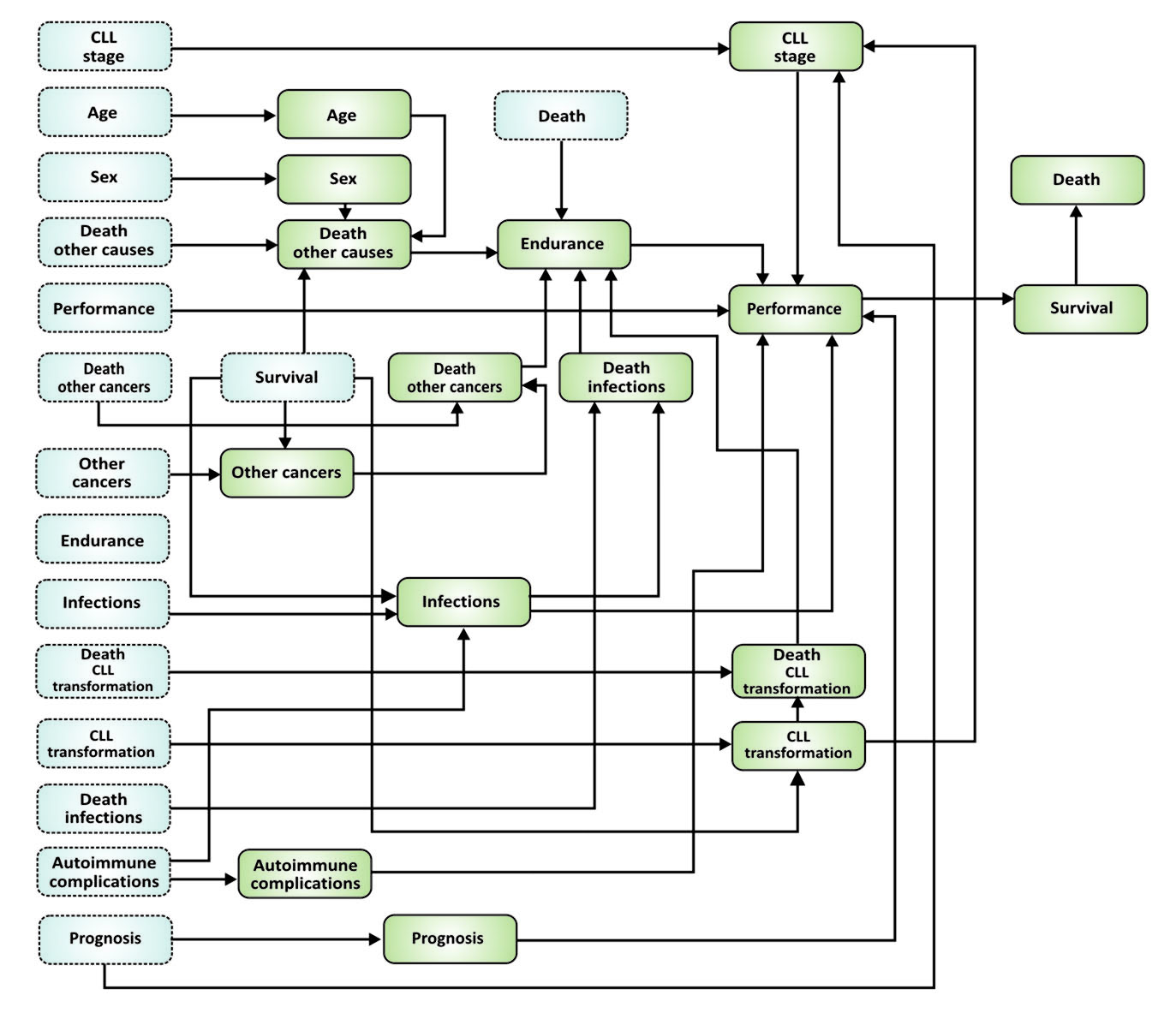 The nodes of the network are described in detail below.

Prognosis, risk factors node is based on parameters determining whether a patient suffers from more or less aggressive CLL. In the implemented network it is assumed that this node can have one of three values, i.e. good, medium or poor. The prognosis is related to values of the prognostic or risk factors such as cytogenetic aberrations, mutational status of the immunoglobulin heavy-chain variable region (IgVH) and status of the selected immunophenotypic markers (e.g. CD38, ZAP70). It is assumed that good prognosis is related to a lack of cytogenetic aberrations or a presence of 13q deletion, presence of IgVH mutation and normal values of immunophenotypic markers. Medium prognosis are connected with 11q deletion or trisomy 12 and a lack of IgVH mutation. Poor prognosis is related mainly to a presence of 17p deletion, that leads to fast progression of CLL and to death within few years from diagnosis [1, 2], independently of the status of other prognostic factors as well as the stage of the disease. It is assumed that the prognosis cannot change in time. Thus, probabilities for this node are defined in the following way (t means the current time slice and t-1 – the previous time slice):

The next factor (node) that influence state of the patient is called Autoimmune complications (i.e. autoimmune hemolytic anemia and immune thrombocytopenia). Probabilities for this node are expressed in the following way:

Where x means a value of probability estimated based on currently available data sources.

Patients with CLL are susceptible to infections because of the lowered immunity. At diagnosis approx. 15% of patients suffers from infections of different origins and this percentage is growing up to approx. 30% due to advancement of CLL, patients’ age and decreasing immunity. Probabilities of Infections is defined as follows:

Death caused by infections (node: Death infections) is pretty common in patients with CLL and it is the direct cause of death in case of approx. 30% of all patients. Probabilities related to this node of the network are as follows:

Other cancers are the direct cause of death in case of approx. 30% patients (node: Death other cancers). Probabilities for this node that are used in the network are defined as follows:

Probabilities for Death other causes node estimated based on the available statistical data are presented below.

Death caused by CLL transformation, infections, other cancers and other causes influences Endurance of the patient. Probabilities for this node are defined in the following way:

In the developed network the Rai staging system is used to characterize state of CLL in a node called CLL stage. Three values for this node are considered: stage 0, stage I or II and stage III or IV. At diagnosis percentages of patients in each stage are as follows: stage III or IV – 39%, stage I or II – 56% and stage 0 – 5%. Some patients with CLL in stages I, II, III and IV have chance for remission as a result of the applied treatment, which might result in temporal improvement of the state of CLL. In the remaining group of patients the disease is progressing with time, which leads to deterioration of the patient’s condition and finally – to death. Conditional probabilities characterizing this node of the network are defined as follows:

Survival of the patient with CLL is possible when Performance node is not equal to death:

There is also Death node defined in the network. Its value is opposite to the value of Survival

Where Pm means probability for two consecutive time slices separated by m months, n is time span for which the probability Pn is known. For the above-mentioned example, n = 300, m = 6, Pn = 0.3 and the probability in question Pm is equal to 0.007.

An exemplary results of simulation for male patient with PBL in stage 0 who was over 65 at the time of diagnosis. 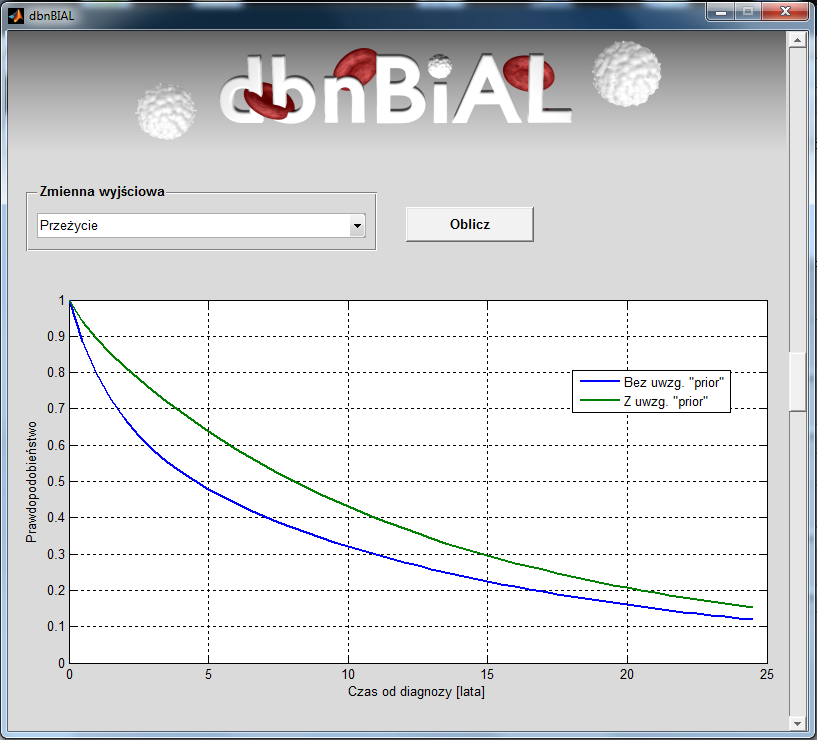